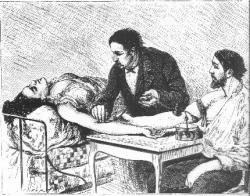 James Blundell was a man ahead of his time in British medicine, for in 1818 he managed to inject a patient who had haemorrhaged with blood, rather than as was the habit still in those days draining blood off to cure various ills.
Blundell was the son of a successful draper in London, but on his mother's side he had John Haighton, a leading medic at Guy's Hospital, under whom the young Blundell studied. Haighton was a practical medic, a specialist in obstetrics, and he is credited with devising various instruments used in assisting childbirth that are still in use in modern times.
Like his uncle Blundell went into obstetrics. Post-partum haemorrhage was a frequent problem, and it was on just such a patient that Blundell carried out his transfusion, using four ounces of blood extracted from the woman's husband, and injected into her with a syringe. Blundell continued to develop his techniques and knowledge in this field, experimenting over the next decade and more. For once an innovator in his field actually did well from it, for when Blundell died he left a considerable fortune, amounting to more than £350,000, a huge sum for the time.
Blundell invented various devices to facilitate transfusion, and in later years worked with men like Samuel Lane, who used blood transfusion in the treatment of haemophilia.