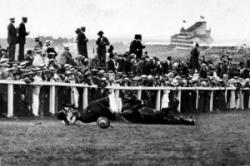 Suffragette dies - throws herself in front of the KIngs Horse

The suffragette movement, demanding the vote for women, had by 1913 become more radicalised, in the modern idiom, faced with the unwillingness of Herbert Asquith and Lloyd George to give way. Emily Davison was to become the movement's greatest martyr.
Davison's own early life encapsulates the ridiculous inequalities of the age, a brilliant scholar who attended St Hugh's College in Oxford funded by her own work as a teacher, and even achieved marks in her final exams that would have seen a male student awarded a first class degree - but being a woman, at that time not admitted to degrees at Oxford, she received no such qualification.
She joined the suffragette movement - The Women's Social and Political Union - in 1906, and soon decided on a more militant course than many of her colleagues. In her brief career as a militant suffragette Davison was imprisoned several times: for throwing stones at Lloyd George; for burning post boxes; and for public disorder.
In Strangeways Prison, Manchester , while serving a month's hard labour, she barricaded herself in her cell to maintain her hunger strike, but the door was beaten down (and none too soon, a frustrated warder had tried to flood her out with a hose pushed through the keyhole, and nearly succeeded, an action that Davison challenged in court and won, awarded £2 for her troubles).
The events of June 5 1913 are still debated, in particular because she had purchased not only a return ticket to Epsom , but an entry to a suffragette dance. Some suggest this was to fool police monitors, others that she never intended to die, or even that her action was spur of the moment.
Patronisingly and stupidly contemporary accounts suggested she was merely trying to cross the course when she ran out during the running of the Derby in front of the kings horse Anmer at Tattenham Corner, in spite of her carrying suffragette flags. She was badly injured, the jockey Herbert Jones was concussed. A newspaper report of the day states "The King made immediate enquiries regarding his jockey."
Davison was rushed to Epsom Cottage Hospital by car, accompanied by a police constable, and early on it looked as if she might recover, her skull being found not to have been fractured. But she did die on June 8 1913.
Emily Davison was honoured by her fellow suffragettes, and she was given two funeral services, one in London and one in Morpeth , where her grave at the church of St Mary the Virgin bears the WSPU slogan Deeds not Words, a motto by which she lived and died.