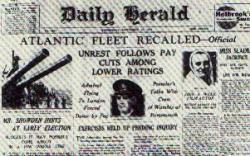 In a scene which must have resembled Jimmy Hoffa meets Sergeant Bilko, where mutinous naval officers were playing piano on deck, singing and roistering, the admiralty failed to see the funny side of the Invergordon Mutiny. Nor should they have.
The dispute over a pay cut to the Royal Navy was a major incident that cut to the heart of the Armed Forces: it was almost unheard of for industrial action to halt military manoeuvres, and for 1,000 officers to embrace a two-day mutiny even more remarkable. But these were tough economic times, not unlike today, where the effects of the Great Depression of 1929 had left the economy stagnant and the public purse half-empty.
The ten per cent pay cuts hit many officers who were for all intents and purposes ordinary working class men, and for junior officers with less than eight years of service, the pay cut was 25 per cent. The admiralty were stricken in the middle between a cabinet looking to cut spending and outraged rank and file officers.
It started when the ten Navy ships of the Atlantic fleet returned to port in the Cromarty Firth. The crews of the Adventure, Dorsetshire, Hood, Malaya, Norfolk, Repulse, Rodney, Valiant, Warspite and York, spilled out and digested the news. The extent of the cuts were still unclear, and indeed the veracity of the newspaper reports. But on the 12th September the fuse was lit.
The Admiralty confirmed there would be cuts, and immediately there was a degree of dissent. There was talk of industrial action amongst the officers, enough to concern Rear Admiral Wilfred Tomkinson. By the 14th September there were disturbances onshore; the following day they had spread to the ships. Crews on Hood and Nelson refused to leave the port. There was a work-to-rule in progress on Valiant and Rodney  the latter indulging in a piano sing-song, the former was effectively grounded.
The mutiny was spreading. Even officers whose rank excused them of the worst pay cuts were encouraged to strike. For Tomkinson this was a huge blow to his career, he was accused of failing to restore order. Some officers received prison sentences, others were discharged, and the mutinous Atlantic Fleet was renamed the Home Fleet. The government relented, and the pay cuts were stalled. Arguably it was they who had miss-stepped, their attempts to shore up the economy destabilising the pound, and creating antipathy with men who in the coming years would be laying down their lives for their country.