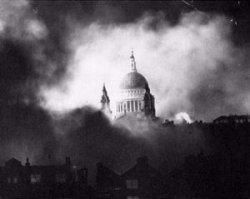 By mid-October 1940 the Battle of Britain was nearing its end but the Blitz was in full flight, with German bombers making it through to London to drop bombs designed to destroy the capital's infrastructure and deflate British morale. And of course London was not alone in suffering.
On the night of October 14 1940 some 500 civilians were sheltering from the bombing in Balham tube station. Two minutes after eight o'clock a 1400kg armour-piercing fragmentation bomb blew a huge crater in Balham High Road above the northern end of the station. A bus then crashed into the crater and ruptured the water and sewage mains. Sand, sludge, sewage and water suddenly gushed into the station. Water-tight doors designed to keep such floods out instead kept this one in. The lights fused, adding to the chaos.
The station was a scene of panic, and though more than 400 managed to escape, 65 or by some account 68 people died in the disaster, most of them drowning. A rescue attempt with a boat sent from Clapham South failed to get through.
News of the event was as far as possible kept under wraps, the government fearing that the grisly death of so many would be a huge propaganda blow and possibly put civilians off using the underground as shelter. Word of mouth spread about the deaths, however, and the work to open the station again lasted until January of 1941, the last bodies being found at the end of December.
An account of the disaster features in Ian McEwan 's novel Atonement, and in the film.