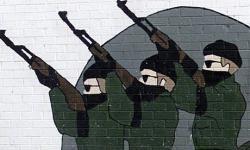 History on 8th May

Loughgall, County Armagh The 8th of May 1987 AD

In the early evening of May 8 1987 an IRA unit began its organised assault on the RUC base at Loughgall in County Armagh. Such attacks previously had proved in IRA terms highly effective, concerted fire directed against any guards and protective barriers to bases being followed by the placing and detonation of a bomb that would demolish the target building. But on this occasion either electronic surveillance (the British government story) or an informer (the IRA fear) had allowed the SAS to prepare an ambush.
As a stolen digger carrying a bomb was driven at the security fence of the base an IRA unit in a van piled out. The bomb exploded injuring three security personnel. But 25 SAS soldiers concealed in the area returned fire. Eight IRA men were killed, all with shots to the head. It was later claimed that some or all had been shot in cold blood while incapacitated. The IRA which showed no mercy in similar circumstances complained its men had been murdered. Any such killings by either side cannot be condoned.
Tragically an entirely innocent man driving through the village of Loughgall at the time of the incident was also killed by the SAS, and his brother in the car with him was badly wounded.