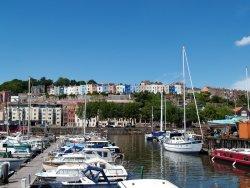 Bristol is a thriving modern city, with a long history that can be traced back over a thousand years. This history has been dominated by its location near to the sea - thus industries such as food and drink, tobacco, paper, print and packaging have shaped Bristol. Although Bristol is no longer a major port the docks still play a key part in Bristol's life. Bristol has a population of about 0.4 million.

Location within Britain is also a key to Bristol's sucess. The M4 and M5 motorways link Bristol to London , the South-East and the Midlands and the North. In close proximity to Bristol are the Cotswolds , the Mendips , and the Forest of Dean across the new Severn Bridge, as is the city of Bath .

The arts flourish, with opera, film, ballet, museums, galleries and music of every kind. Bristol has two main football teams ( City and Rovers ), two main rugby teams (Bristol and Clifton) and contains Gloucestershire Country Cricket Club 's ground. Bristol also has some stunning architecture. Bristol has two Universities, Bristol University (founded in 1876) and the University of the West of England (formerly a polytechnic). Both have influenced the city, Bristol University also own many of the historic buildings in Bristol.

Some of Bristol's money in the past has come from the slave trade. Some of Bristol's ships traded British goods for slaves, which were then traded in turn for goods such as sugar and tobacco, which in turn were brought back to Bristol. It is also known that some slaves were brought back to Bristol as house servants. A few legacies have remained and it is hoped that any such ill-gotten gains are now used in better ways.