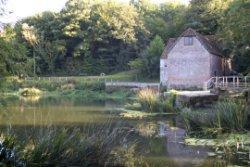 Situated in a beautiful corner of East Anglia on the borders of Suffolk and Essex , the Constable Country is based on the area where John Constable , the famous English Romantic painter, lived and painted. Constable Country is based around Dedham Vale , the area surrounding the artist's home. Constable was born in East Bergholt in Suffolk, the son of a wealthy corn merchant. The budding young artist persuaded his father to allow him to pursue art as a career and his father even provided him with a small allowance to help him. Constable turned down the post of Drawing Master at the Great Marlow Military College in order to pursue his desire to paint the beautiful landscapes in the area in which he lived. The master of the Royal Academy at the time predicted that this would prove to be the end of Constable's career!

That same year (1802) Constable painted 'Dedham Vale', one of his most famous paintings. Dedham Vale is a designated Area of Outstanding Natural Beauty that comprises the area around the River Stour between Bures and Manningtree .
Another of Constable's famous pictures depicting a scene from this area is The Hay Wain. Constable painted this in 1821 and it shows a hay wain in front of Flatford Mill, at Flatford on the River Stour. Flatford Mill was owned by Constable's father.
The Mill is now an environmental education centre offering a unique learning experience for all ages, in a beautiful and tranquil setting.

To experience Constable Country at its best you should consider either walking or cycling. There are many organised routes to take in the beauty that the area has to offer and plenty of places offering cycle hire should you need it. One example is the Constable Country Walk, from Manningtree Station to Flatford and Dedham. Manningtree Station is conveniently on the mainline from London Liverpool Street to Ipswich/Norwich.

There are many villages in the area worth a visit including East Bergholt, Capel St. Mary, Stratford St. Mary, Bentley, Dedham, Langham, Lawford and Flatford. Nearby towns are Colchester , Manningtree, Ipswich , Hadleigh , Sudbury and Lavenham.
In East Bergholt, you can visit the East Bergholt Place Gardens, a woodland garden and arboretum. Lavenham has the spectacular church of St Peter and St and is the site of a World War II airfield. Castle House at Dedham is the former residence of artist Sir Alfred Munnings and exhibits much of his work. The house is open during the summer months.