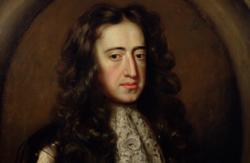 William III (William Of Orange) was born on the 4th November 1650 at the Hague, son of William Prince of Orange and Mary Stuart who was the eldest daughter of Charles I. Sadly William's father died just before he was born and his mother died when he was just 9 years old, so at a very early stage in his life he became independent. The arranged marriage between the first cousins was set up by Charles I, and so it was that William married Mary , who was the daughter of James II and his first wife Anne Hyde. They married on the 4th November 1677, she was not entirely pleased about the match as she was twelve years his junior, and his demeanour and looks failed to thrill her.

The crown was offered jointly to William and Mary after a succession of events, William was invited over to England and arrived in the November of 1688 at the request of Parliament, who had appealed to William to rescue England and way lay a Catholic take over, he amassed a huge Armada which landed at Brixham, near Torbay in Devon James II decided to retreat to France, where he felt safer, it was then deemed that James had in fact abdicated, although he only ever made one attempt to try to regain his crown, but was at that time bitterly defeated at the Battle of Boyne, he was destined to live the rest of his life, in exile in France.

The joint reign of William and Mary took effect in February 1689 whereby they succeeded James, they reigned over England, Scotland and Ireland. Their Coronation took place on the 11th April 1689 at Westminster Abbey.

They changed the face of the monarchy when they signed the Bill Of Rights, they lost their supremacy to Parliament, which restricted the use of Royal Rights, an income was set, the laws changed whereby they were unable to gather an army without the approval of Parliament, and the Bank Of England was introduced. The Settlement Act came into force which forbade wars, without Parliament's approval.

William did not enjoy robust health and was bothered by the incessant smog of the city, they moved together with their Court to Hampton Court Palace in Richmond, Richmond upon Thames on the outer edge of London, two sets of apartments and many changes were undertaken, Christopher Wren worked his magic with stunning architecture and sumptuous decoration.

William had spent much of his time abroad on military campaigns and left Mary to rule, she became a popular Queen, and, at the age of just 32years, she died in 1694 after contracting Smallpox. He continued to reign, alone, over England, Scotland and Ireland, until whilst hunting in the grounds of Hampton Court Palace, Richmond Park, his horse fell and he suffered injuries, although they healed he contracted a chest infection, which resulted in his death on the 8th March, 1702 at Kensington Palace, he was buried at midnight in Westminster Abbey.

Contributors: Do you have a site related to William III?
Supply some content for this page and we will gladly add a link to your site. Email here.