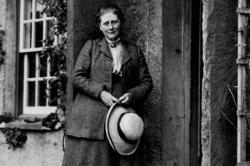 Helen Beatrix Potter was born on 28th July 1866 and died on 22nd December 1943. She was an English author, illustrator, mycologist and conservationist who was best known for her children's books featuring animal characters such as Peter Rabbit, Squirrel Nutkin and Mrs Tiggy-Winkle. She published 23 children's books which continue to sell well worldwide and her stories have been retold through ballet, film and animation. She was born in South Kensington, London into a privileged household and spent many family holidays in Scotland and the Lake District, thus developing a deep love and fascination for nature and conservation. As a child she was educated by a succession of governesses and spent much time sketching her many pet animals. From the age of 15 until into her 30s she became her parents' housekeeper and recorded her everyday life in journals, using a secret code. She was rejected as a student at the Royal Botanic Gardens at Kew because she was female, but went on to uncover ground breaking observations on lichens and fungi, becoming widely respected throughout England as an expert mycologist. Her literary career began at the age of 27 when she sent a story about rabbits to the 5 year old son of her last governess. She then made the story into the book The Tale of Peter Rabbit and attempted to find a publisher for it. This proved difficult and so she decided to have 250 copies printed privately. Eventually Frederick Warne & Co agreed to publish it in 1902 and asked Beatrix to illustrate it. It sold well and she followed this with The Tale of Squirrel Nutkin in 1903. She also became secretly engaged to her publisher, Norman Warne in 1905. However, soon after the engagement Normal fell ill and died, leaving Beatrix devastated. After Norman's death, Beatrix purchased a farm in the village of Sawrey, Cumbria in the Lake District. With the steady income from her books, she began to buy pieces of land under the guidance of local solicitor William Heelis whom she married in 1913 at the age of 47. Whilst living in the Lake District Potter began breeding and showing Herdwick sheep and became a respected farmer. In her will, Beatrix Potter left nearly all her property to the National Trust which included 4,000 acres of land, cottages and 15 farms. The legacy has helped preserve the Lake District and fell farming to this day.

Contributors: Do you have a site related to Beatrix Potter?
Supply some content for this page and we will gladly add a link to your site. Email here.