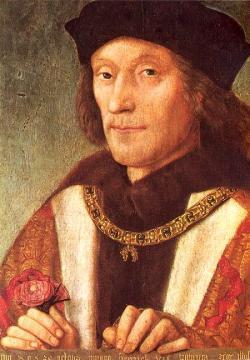 Henry VII was born in 1457 at Pembroke Castle in Wales, his father was Edmund Tudor, and his mother was Lady Margaret Beaufort. Henry's father died just before he was born, and he stayed with his uncle, Jasper Tudor, in Wales, but when the imprisoned Henry VI died in 1471 his uncle smuggled Henry to Brittany in France as he feared for his safety. In 1483 Henry had much support and decided to return to Wales to rally an army, and he unsuccessfully tried to invade England. When Edward IV was re-instated to the throne, he declared war on France, Henry fled back to France. Edward became increasingly ill, and arranged in his will that his brother Richard would assume the role of Lord Protector of the Realm, after his death.

Edward died in 1483, and was buried in St Georges Chapel at Windsor, his 12 year old son succeeded him as Edward V, however Richard imprisoned his two nephews in the Tower Of London, and they mysteriously vanished. Richard took the crown, declared himself as King, and ruled as Richard III.

Henry had the support of the French Court and unsuccessfully attempted to invade England, he was forced to return back to France. He again decided to invade England with his increasing support, in order to claim the crown from the unpopular King Richard, the decades of the warring houses of York and Lancaster was coming to a head, he landed in England and a bloody battle ensued, the Battle Of Bosworth, in Leicester took place in 1485, which saw the defeat and death of Richard III, and the end of the Wars of the Roses. It also hailed the start of the reign of the Tudor Dynasty which was to last for 118 years in England.

Henry married Elizabeth of York, who was Edward IV's daughter which ensured a uniting of the two sides. They had several children, Their eldest son, Arthur married the Spanish princess Catharine of Aragon, ensuring an alliance with Spain, their daughter Margaret married James IV who was King of Scotland. Their other daughter Mary, married Louis XII of France, and Henry, who was to reign as Henry VIII, who, on the death of his brother was promised in marriage to Catherine Of Aragon.

His prudence in his spending resulted in the filling of the coffers of the treasury, and throughout his reign he raised taxes, and maintained peace, he also declared that it was illegal to gather a private army, and introduced The Yeoman Of The Guard. He died on the 21st April 1509, at Richmond Palace, aged 52, he was buried at Westminster Abbey in London. Henry succeeded his father and ruled as the infamous Henry VIII at just 18 years of age

Contributors: Do you have a site related to Henry VII?
Supply some content for this page and we will gladly add a link to your site. Email here.