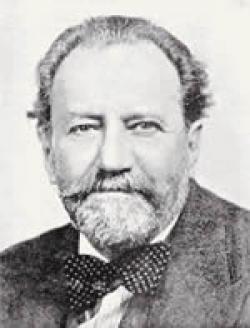 Born in Kensington, London
Born on 3rd of March 1869
Died in Hitchin, Hertfordshire
Died on 19th of August 1944

Henry Wood changed British music forever without composing a single piece of lasting note, though he was an orchestrator of some talent. It was for his foundation of the Proms along with Robert Newman that he will always be revered in this countrys musical circles (and by those who attend the last night).
Wood, born in London in 1869, was a gifted natural musician from a very early age, playing the organ, piano and violin as well as singing. His greatest musical love was singing, and when he entered the Royal Academy of Music his intention was to teach singing after his studies, as indeed he did, but conducting proved more lucrative and equally satisfying  he worked with various opera companies early in this stage of his career.
From 1893 he collaborated with the manager of the Queens Hall, Robert Newman, on the latters idea for a series of summertime promenade concerts, relaxed affairs designed to spread the love of classical music beyond its then narrow confines. The first was held in August 1895. Wood was pushed to conduct all of the concerts himself by the sponsor he and Newman secured, a role he fulfilled for many years until failing health brought on by overwork made it impossible.
Wood was a reformer as regards orchestras: he gained the love of players by working for greater rewards for them; but was disliked by some for killing off the notorious deputy system. He also liked promoting newer composers. Knighted in 1911, he was made a Companion of Honour in 1944, months before his death.

Contributors: Do you have a site related to Henry Wood?
Supply some content for this page and we will gladly add a link to your site. Email here.