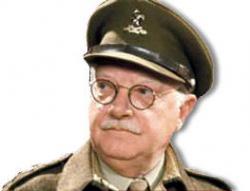 Became an actor while in army during WWII. Stage appearances included Larger Than Life (1950) and The Pajama Game (1955). Became well-known as Mr Swindley in Coronation Street and Captain Mainwaring in Dads Army (1968-77). Film appearances included The Ruling Class (1972) and O Lucky Man (1973).

Contributors: Do you have a site related to Arthur Lowe?
Supply some content for this page and we will gladly add a link to your site. Email here.