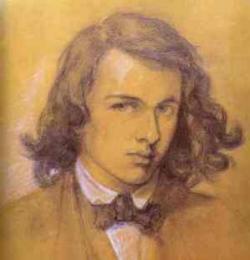 'The worst moment for the athei'... More

Dante Gabriel Rossetti was born in London on May 12, 1828 of Italian/English parents. Exposed from his earliest years to medieval art and poetry, particularly Dante, he was to give masterful expression to these influences in his work.

The young Rossetti was accepted by the Royal Academy in 1846 but left after only one year to study under Ford Maddox Brown. In 1848, reacting against the frivolity of art as he saw it, Rossetti formed the Pre-Raphaelite Brotherhood with William Holman Hunt and John Everett Millais. Around a year later he met Elizabeth Siddal, a milliners assistant who became his model and muse. Engaged since 1851, they were finally married in 1860. Sadly Lizzie Siddal died of a laudanum overdose two years later. A heartbroken Rossetti interred his poems in her grave (they were later exhumed and published in 1870). Beata Beatrix, one of his most iconic works, was painted as a memorial to her.

Rossettis idealized vision of women with elongated necks and flaming red hair came to define much of his later work and reflected the intense relationships he was prone to develop with his models. A friend commented; D.G.Rnever made a memorandum of anything in the world except the female face between sixteen and twenty-six

His passion for Dante found expression in 1861 when he published translations of his poetry and that of other early Italian poets. In 1880, shortly before his death, he returned to poetry. Today Rossettis poems are increasingly seen as equal and complementary to his paintings. He died April 9, 1882 at Birchington-on-Sea in Kent.

Contributors: Do you have a site related to Dante G Rossetti?
Supply some content for this page and we will gladly add a link to your site. Email here.