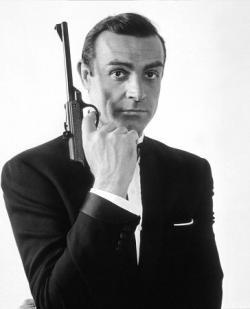 Born in Edinburgh, Edinburgh and the Lothians
Born on 25th of August 1930

Sean Connery, born August 25th 1930 Thomas Sean Connery in Fountainbridge, Edinburgh, is an award-winning Scottish actor and producer who is probably best known as the first actor to play James Bond in cinema, starring in a total of 7 Bond films. The eldest of 2 boys, Sean's father Joseph was a factory worker and truck driver and his mother Effie a cleaner. He left school early and worked as a milkman before joining the Royal Navy, aged 16. He was later discharged on medical grounds, and returned to work as a milkman. This was followed by a series of menial jobs including lorry driver, bricklayer and coffin polisher. Sean spent much of his free time body building which took him into modelling work and eventually acting. He came third in the 1950 Mr Universe competition. A series of theatrical bit parts and chorus appearances followed including a tour of 'South Pacific', until he was cast opposite Lana Turner in the 1958 film, 'Another Time, Another Place'. He was a keen footballer and was allegedly offered a contract by Matt Busby who spotted him playing in a game against a local team whilst on tour in 'South Pacific'. He was discovered by Harry Saltzman and Albert R. Broccoli who were scouting for an unknown actor to play James Bond. Connery's portrayal of the Bond character owes much to the mentoring of director Terence Young who, it was thought, fit the classic erudite, sophisticated lady's man profile of the Bond character. His first appearance as 007 was in 'Dr No' in 1962, followed by 'From Russia With Love' in 1963 and 'Goldfinger' in 1964, 'Thunderball' in 1965 and 'You Only Live Twice' in 1967. He quit the role after this but was lured back to appear in 1971's 'Diamonds Are Forever' with a then unheard of $1 million fee. He then broadened his career somewhat by appearing in films such as 'Murder on the Orient Express' (1974), 'The Man Who Would Be King' (1975), alongside Audrey Heburn in 'Robin and Marian' in 1976 and the sci-fi films, 'Outland' and 'Time Bandits' in 1981, as well as parts in ensemble casts in 'A Bridge Too Far' and the acclaimed 'The Wind and the Lion'. After saying "never again" to Bond, he resurfaced as 007 for the final time in 'Never Say Never Again' in 1983. He won a BAFTA for his role in the 1986 film, 'The Name of the Rose' and in 1988 he won an Oscar for best supporting actor in 'The Untouchables'. He appeared in 'Indiana Jones and the Last Crusade', the third of the India Jones franchises and the highest grossing movie of 1989. The 1990s saw him appear in box office hits 'The Hunt for Red October', 'The Russia House', 'The Rock' and 'Entrapment' which he also produced. In the year 2000 he appeared in the highly regarded film, 'Finding Forrester' which preceded the 2003 flop, 'The League of Extraordinary Gentlemen', following which he announced his retirement from the industry. He has been married twice, firstly in 1962 to Australian born actress, Diane Cilento until 1973, with whom he had one son, the actor Jason Connery. In Diane Cilento's autobiography, 'Nine Lives', she paints a very unflattering portrait of Connery, accusing him of abuse. An accusation he has vehemently denied. He has been married to French artist, Micheline Roquebrune, since 1975 and the couple live in the Bahamas. Connery has long supported the Scottish National Party, and has founded Scottish charities to support Scottish film production and poor children in Edinburgh. He received a knighthood in July 2000.

Contributors: Do you have a site related to Sean Connery?
Supply some content for this page and we will gladly add a link to your site. Email here.