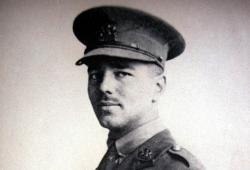 'Those who have no hope pass th'... More

It is fair to say that without Wilfred Owen, the general perception of the First World War would be very different. A solider-poet who died in battle and who is best remembered for Dulce et Decorum Est and Anthem for Doomed Youth, he brought a very human face to a war that was characterised by the almost mechanised and ritualistic destruction of troops.
Born in 1893 in Shropshire, Owen was artistically influenced in particular by John Keats, and worked as a tutor in France, specialising in English and French, before war broke out. He enrolled in 1915 and was injured in the field, requiring a period of convalescence in Edinburgh, where he met fellow poet Siegfried Sassoon. After a short period teaching he returned to the front and led troops on various sorties in Northern France, but was shot and killed in November 1918, close to the end of the war, aged just 25. He was posthumously awarded the Military Cross.
His poetry was greatly influenced by his contact with Sassoon, after which Owen started following a much more realist bent; in particular, he never shied away from providing the gorier details of war which until then had been kept largely hidden. Before his death, only five of his poems had been published, and the spectre of Dulce et Decorum Est looms largest  it is regularly included on various school curricula, and is famous for being a mainstay of GCSE English Literature.

Contributors: Do you have a site related to Wilfred Owen?
Supply some content for this page and we will gladly add a link to your site. Email here.