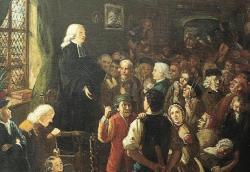 Catch on fire with enthusiasm and people will come for miles to watch you burn. John Wesley lived up to his words with his preaching which helped inspire a religious revival in the 18th century. His legacy lives on in the Methodist movement.

Wesley was born on June 28 1703 at Epworth, Lincolnshire. Through his parents he absorbed a strong religious commitment. Educated at Charterhouse and Oxford he became a tutor there in 1726. With his brother Charles he established the Holy Club derisively termed Methodist due to their prescribed method of bible study. In his ongoing quest for spiritual fulfillment Wesley was ordained an Anglican priest in 1728.

In 1735 Wesley chose to take his mission to Georgia, USA, but there became embroiled in a damaging court case and returned disillusioned after just three years. He found solace in the Moravians belief in salvation through faith in Christ. Wesley had a direct experience of this in 1737 feeling his heart strangely warmed, and shortly afterwards preached the first of what were to be the more than 40,000 sermons he delivered in his life, many of them in the open air.

For more than 50 years Wesley travelled all over Britain on horseback, averaging 5,000 miles a year and often preaching three times a day. His sermons attracted large crowds and he ordained many converts as lay preachers. Although Wesley wanted to remain within the Church of England his non-conformist evangelism meant a split could not be avoided and by 1784 Methodism was a fully independent movement.

Throughout his life Wesley was strongly opposed to slavery and advocated prison reform. He continued preaching up until just 4 months before the end of his life. He died in London on March 2, 1791.

Contributors: Do you have a site related to John Wesley?
Supply some content for this page and we will gladly add a link to your site. Email here.