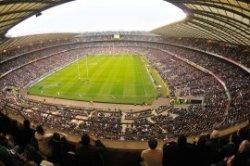 Twickenham, home of rugby at least for those with the red rose on their shirts (coindcidentally known for its many pubs), is also a rather posh part of the capital with fine frontage on the Thames, some historic houses, and a green leafy feel to it... Read More

Hotels in Twickenham - 9 places to stay

Located just 6 miles from Heathrow Airport and 20 minutes from Central London, the London Marriott Hotel Twickenham sits within the South Stand of Twickenham Rugby Stadium the home of ... More