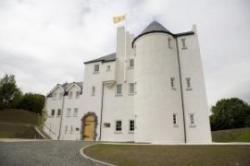 Add your review
Another wonderful meal with care and extra attention from Chris who has a good sense of humour and Rhonda who is loving and bubbly and the special Alaine who made us feel special too.Also the beautiful girl who was serving at the bar although I do not know her name. Could name badges be considered as it is good manners to address each other by name and I always have to ask. Please remind the Chefs the they are good. All in all I wish I could dine at Glenskirlie much more often. I've started saving for the next treat. Hope to be back soon to the best and our favourite restuarant. Best wishes also to all of the team who work behind the scenes to keep Glenskirlie the beautiful place it is. Appreciatively yours Jennifer

Add your review
Having previously had a number of wonderful meals in the Glenskirlie House restaurant, as well as recently reading a review of the new developments, we were really looking forward to experiencing the new Castle Bar and Grill. Our table which we had been promised would be a bit special had been booked by friends. The venue is great from the moment the 'castle' appears as you drive along the road to the bar and eating areas. Sadly the service and general attention to the diners failed to meet our memories. We had been bumped from our table of choice. The dishes arrived in a somewhat lackadaisical manner and the meals were sadly similar. The starters lulled us into a sense of false hope as they were without exception superb. The mains, other than mine, were disappointing. My steak was beautifully cooked and just as I had hoped for and expected and the salad I had chosen was nicely dressed with just the right degree of bite. My companions meals however were not of the same order. The vegetables were ordinary and the sprouts barely cooked. Now I enjoy my sprouts with a nice crunch but these were not even warm in the centre. My partner felt that the somewhat pedestrian vegetables detracted from the subtlety of the scallops. Perhaps they would have worked better with the lamb for which they had originally been intended. Finally came the desserts - OK but quite quite ordinary. In fact I could have obtained better at a well known pattiserie in my native City and they would have shone in comparison. The above coupled with champagne being poured at a nearby table in a manner I can only describe as rustic - beer being served in bottles (how quaint when paying in excess of £35-00 per head). Wine being spilt onto coats and cutlery dropped resulted in an evening that seemed overpriced for the total experience - note I lay no blame at the door of our waitress - as she should have been better trained. It was difficult to not compare it - unfavourably - with the Gastro Pub in Glasgow centre where my partner and I had enjoyed a lunchtime snack where the waitresses were smartly dressed, efficient to a fault and had handed our meals and drinks to the person who had ordered it without missing a beat or asking us to whom each meal belonged - this without making a single note. Will we go back? Definitely as we know just what can be achieved but were it our first time then I sincerely doubt it.