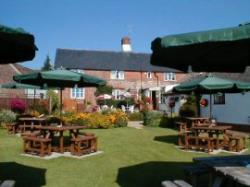 Reviews of The Martlet Inn, Wellington

Add your review
Never in my whole life have I been to eat out and had such an appalling service or food. My friends and I ordered our food and two of us ordered sweet chilli salmon bean salad. When the food arrived the salmon was the wrong dish so obviously we asked for it to be rectified, this is always an inconvenience due to the rest of our party eating without us and due to the way one of the waitress' dealt with us (not even an apology) in fact she went as far as to accuse us of ordering the wrong food, due to her manner I complained about her, at the time I didn't realise she was the owner, but once she heard of the complaint she came to our table and was extremely confrontational, she would not take responsibility for the mistake and accused me of having drunk too much, I had at this point had half a glass of red wine and was totally sober. Never before have I been treated with such disgust, I would never go back to eat here, she eventually knocked a bottle of wine of our bill which I still don't understand, there was nothing wrong with the wine our food on the other had when it did eventually come out was not accompanied by the bean salad as stated on the menu, and when I brought this to her attention also she informed me it was not bean season, this should have been said on ordering the food!! The owner of this 'business' needs a lesson in customer service, I have never been made to feel this way whilst eating out and would recommend anyone to avoid this place like the plague.

Add your review
We visited for a meal before Christmas thinking we were going to treat outselves to a fantastic treat. It was very standard pub food and we were so disappointed. The starters were the usual prawn cocktail and breaded brie, nothing special. The steaks were OK with salad garnish and chips and the puddings were very ordinary. I was charged £3.95 for one blob of carte d'or icecream which was quite watery accompanied by a strawberry cut in half. I thought the evening was spoilt but the pub is nice. Great pity.

Add your review
Fantastic night spent at The Martlet. Perfect atmosphere, friendly staff and wonderful food. Hospitable and accommodating and a wonderful landlady. Made our large family party night out one to remember!