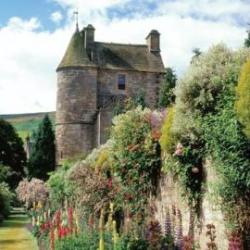 The Royal Palace of Falkland was the country residence of the Stuart kings and queens when they hunted deer and wild boar in the Fife forest. Mary, Queen of Scots spent some of the happiest days of her tragic life 'playing the country girl in the woods and parks'. The Palace was built between 1501 and 1541 by James V, replacing earlier castle and palace buildings dating from the 12th century, traces of which can still be seen in the grounds. The roofed South Range contains the Chapel Royal, and the East Range the King's Bedchamber and the Queen's Room, both restored by the Trust. The Keeper's Apartments in the Gatehouse are also on display. The palace contains fine portraits of the Stuart monarchs and two sets of 17th century tapestry hangings.

The garden, designed and built by Percy Cane between 1947 and 1952, contains three herbaceous borders enclosing a wide lawn with many varieties of shrubs and trees. Here also is the original Royal Tennis Court - the oldest in Britain still in use - built in 1539. There is also a small herb garden border featuring quotations from John Gerard's book 'Herball' (1597). Recorded sacred music played hourly in Chapel. Exhibitions at Royal Tennis Court and at Town Hall.