Pub and Bars in Battle 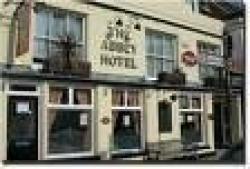 The Abbey Hotel offers stylish and comfortable bed & breakfast accommodation, as well as locally brewed ales, and a delicious menu to suit all tastes! A welcoming bar and restaurant awaits, a spacious beer garden with views across the magnificent Sussex countryside which incorporates a heated smokers area and a sun terrace overlooking Battle Abbey. The attractive town of Battle gets it name from the Battle of Hastings, which was fought between Harold the Saxon king and William the Conqueror in 1066. The battle was so significant it changed the course of English history. The town grew up around the Abbey of St Martin which was built by William the Conqueror after the battle. It is said that William vowed that should he win the battle he would build such an abbey. The abbey was built between 1070 and 1094, and the high altar is believed to have been placed on the spot where Harold fell. Today the Abbey ruins and the battlefield are cared for by English Heritage and are well worth a visit. The imposing Abbey gatehouse built circa 1338 can be seen as you look down the length of the High Street. Battle has some notable Georgian buildings along its High Street. The cottages and houses near the Abbey date from around 1700. The parish church of St Mary was built in Norman times and for the most part is 12th century in construction. It offers the visitor rare 14th century wall paintings and a Norman font amongst other things. At the Northern end of the High Street can be found the Almonry which was built in 1090 and now houses the Town Council and the Battle Museum of Local History. The town of Battle was gradually built around the Abbey, and later developed a reputation for the quality of the gunpowder produced in the area. In the mid 1700s, the town supported five watchmakers in the High Street. Today, Battle is known as a tourist destination.


More Pub and Bars nearby