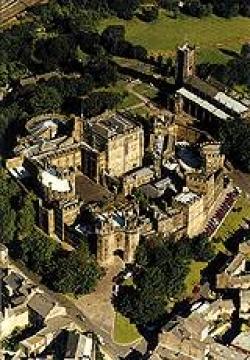 For a breathtaking panorama that is hard to beat in the whole of the North, take a side trip off the M6. The view is over Lancaster, Morecambe Bay, and on into the Cumbrian Fells with the mountains on a clear day ranged in lines into the distance. Leave the M6 going north at Junction 33, take the first exit off the roundabout, then sharp left again into Hampson Lane. At the end turn right, then at the junction a few hundred yards on take the road sharp left (Bay Horse Road). Follow the pylons across the hills for a couple of miles, then near Quernmore take a left into Wyredale Road that becomes Langthwaite Road. As you breast the hill you will get a view taking in the city of Lancaster and the sea beyond.

The Furness Line between Lancaster and Barrow-in-Furness. Forget the Blue Train and the Orient Express (unless you have won the lottery or work in merchant banking). There are some great little train journeys all over England, some on private lines run by enthusiasts and entrepreneurs, others on the national system. One of the best is the Furness line between Lancaster and Barrow-in-Furness. Lancaster is easily reached off the M6, or by trains from Manchester and Preston. The Furness line branches off to the west, and takes in some glorious countryside. Or it can be joined at Carnforth on the West Coast Main line. After Lancaster the Furness line passes through Carnforth, famed as the station used in Brief Encounter. Next the line passes behind Silverdale, a quiet little town with some lovely walks by the sea (if you can see it  this is Morecambe Bay and when the tide goes out you wonder if it is ever coming back). After Silverdale is Arnside, another quaint resort without an amusement arcade in sight. And at Arnside the real fun begins, with the first of the lines two viaducts, this one crossing the Kent estuary, the trains passing marked by a an evocative and sonorous rattling  the sort of noise trains should make when they go over a bridge or viaduct. Once over the Kent the line follows the shore to Grange-over-Sands, the genteel Edwardian and Victorian resort where it is hard to imagine anyone ever swearing. A little further one and the line cuts across the Cartmel Peninsula from Kents Bank to Cark and Cartmel. It is a hike to Cartmel from the station, but the magnificent Priory Church and the lovely old Gatehouse are well worth seeing. The Priory Church is imposing, saved from the dissolution by its use as the parish place of worship. Cartmel itself is a beautiful settlement, the sort of place where you find good bookshops and great pub food (this is the home of the sticky toffee pudding after all) rather than souvenir shops. And there is the racecourse too, possibly the prettiest in the land. After Cark the line has its second viaduct, across the Leven estuary. Sweeping on to Ulverston, home of the famous Laurel and Hardy museum  Stan Laurel was born here, and more spiritually of nearby Swarthmoor Hall, which can claim to be the home of Quakerism. After Ulverston the line stops at Dalton, where the castle can be seen, though this is not anywhere near as impressive a sight as Furness Abbey that the train passes as it heads to Roose and Barrow-in-Furness, the end of the line, though it is also the start of the line for the Cumbrian Coast to Whitehaven, Workington and Carlisle, a route that rivals the Furness line for its scenic nature.

Lancaster Market.
The surroundings are historic, with a real atmosphere to the streets and shops round the street market on a Saturday. The food at the market is a mixture of the old and the new that gives a snapshot of modern England. Here you will find at least twice a month the fabulous salt marsh lamb raised on Cockerham marshes by the Lawson family, farming the land for generations. Here too are stalls selling wonderful olives and locally made Italian-style breads. Further on is the oriental food stall. And on a corner exuding utterly irresistible smells is an old-fashioned donut stall, though you may have to queue behind some of the boys from Lancaster Grammar, founded in the 13th century, displaying the appetite and digestion only the young possess.