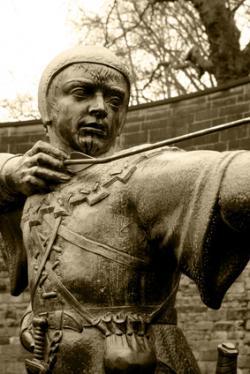 In the Footsteps of Robin Hood

The legend of Robin Hood centres around the character and deeds of one of Englands most enduring of folk figures. Said to rob from the rich to give to the poor, the origins of Robin Hood are subject to debate. What is for sure is that many claim that the story took place in and around Nottingham , which at the time was surrounded by the then mighty Forest of Sherwood . Visitors to the area increased after the BBCs television show Robin Hood from 2006. With a new blockbuster film about the folk hero released in 2010, the interest in the legendary figure has reached a new high.

Its possibly no more than the story of a jumped up outlaw, life was tough in medieval times and travel through the forests could be dangerous. Whatever the truth or origins of the story, the people and merchants of Nottingham have long been keen to keep the association with the loveable rogue strong and this is evidenced in the use of his name in everything from street names to street festivals. The Robin Hood Way runs through Nottinghamshire and the county is home to literally thousands of other places, roads, inns and objects bearing Robin's name. So proud is the local government of Nottinghamshire that the website dedicated to developing Nottinghamshire economically and as a tourist destination has several pages on Robin Hood. The website also has details of the Robin Hood Breaks, holidays and weekend breaks in what it describes as  Robin Hood Country .

There are many places a Robin Hood tour might start and The Major Oak should be one of them. This is a huge and ancient Oak tree growing near the village of Edwinstowe in the heart of Sherwood Forest. Major Oak is estimated to be between 800 and 1000 years old and, according to local folklore, it was once the place where Robin Hood and his merry men took shelter and slept. Sherwood Forest, which has been continually forested since the Ice Age is now just a 165 square mile remnant of a woodland that once stretched across all of Nottinghamshire and into several neighbouring counties. Parts of the forest are open to the public as a country park and a portion of it is a designated National Nature Reserve. Sherwood Forest Park is the host to the annual Robin Hood Festival , a week long celebration of the famous archer and his band of merry men. The event attempts to recreate a medieval atmosphere and features the major characters from the Robin Hood legend. The entertainment includes jousters and strolling players, suitably turned out in medieval attire. A medieval encampment is established at the festival, complete with jesters, musicians, rat-catchers, alchemists and fire eaters. There is a visitor centre in Sherwood Forest, conveniently near to the A1 and with good parking facilities.

The village of Edwinstowe now lies at the very heart of the surviving forest and is also close to the Sherwood Forest Country Park.The village is the location of St Mary's Church , the place where Robin and Marion were said to have married. The church dates from around 1175, and is still used daily as a place of prayer and worship.

Nottingham is full of places associated with Robin Hood. The outlaw is said to have prayed in St Marys Church situated on High Pavement at the heart of the historic Lace Market district. The legend says that Robin Hood had an argument with Little John and stormed off to the church to pray. He was spotted by a monk who alerted the Sheriff of Nottingham who then sent a troop of men to arrest Robin. Despite killing a dozen of the soldiers Robin was captured, only to be freed by Little John later!

Nottingham Castle , first built in 1067, features in many of the Robin Hood tales. The Norman castle would have stood as a sign of the oppressive Norman dictatorship that had ruled England since King Harold was defeated by William the Conqueror at The Battle of Hastings in 1066. It is no coincidence that many films depicting Robin Hood show the bad guys, The Sheriff of Nottinghams henchmen, dressed as Norman soldiers. The grounds of Nottingham Castle are transformed each year into a medieval village encampment for the Robin Hood Pageant . The event allows visitors to travel back in time to the 12th Century and enjoy spectacles such as medieval jousting and combat.

Near to the suitably named Thieves Wood, not far from Kirkby In Ashfield , is Fountaindale, the place where Robin Hood is said to have first met Friar Tuck. There are two car parks in the area, both of them off the B6139, that give access to trails through Thieves Wood. Haywood Oaks and Blidworth Woods are both worth a visit due to the mature oak trees that dot the woodland there. These are hundreds of years old, survivors from a time when Sherwood was still an ancient wilderness that would have rivalled even the Amazonian rain forests in its wonder. Deer and even adder are still seen in Blidworth Woods, but you wont see the bear, wolves or wild boar that once roamed free there.

Visitors wishing to take a trip around the home of the Robin Hood story will be pleased to know that Nottinghamshire is just as richly endowed with great accommodation as it is with old legends. Bestwood Lodge Hotel has history of its own. The building is a former Royal hunting lodge set in 700 acres of parkland in the heart of Robin Hood country, four miles from the centre of Nottingham. The Hilton Nottingham Hotel is an elegant city centre hotel with an outstanding range of facilities. The Hilton is situated within walking distance of many local tourist attractions, its ideally placed for exploring both city and the surrounding countryside. Colwick Hall Hotel is a magnificent palladian style Georgian country house mansion nestling in over sixty acres of parkland, just two miles from the centre of Nottingham. A historic building dating back to Saxon times and once the ancestral home of Lord Byron the elegant rooms and suites there have been restored to their former glory for the delight of their guests. Out in the countryside near Edwinstowe and Mansfield is the Portland Hall Hotel . This Grade II listed mansion was built in 1805 and is set in fifteen acres of the most beautiful parkland. It was once owned by the Duke of Portland.