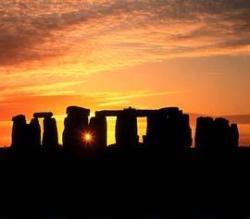 If you had to choose one area of Britain in which to explore our prehistoric past, it would have to be Wiltshire , and not just for the great sites of Stonehenge and Avebury . It is hard to tour the county without coming across one of the 50 or more hillforts there; spotting the many barrows; or seeing either of its ancient white horses at Uffington (now officially in Oxfordshire) or Westbury .
The obvious starting point in such a tour, however, must be Stonehenge, just two miles from Amesbury and 10 miles or so from Wiltshires only city, Salisbury . The skyline of the stones there is as recognizable as New Yorks, though rather longer in the making  it is thought that people from several cultures contributed to the great henge, with evidence found relating to activity 10,000 years ago, though construction took place between about 3000BCE and 1500BCE. Why it was built remains a mystery which will engage the imagination of any visitor. Some 20 miles further north, just off the A4 between Chippenham and Marlborough , you find around Avebury a quartet of ancient sites that rivals and complements Stonehenge  they were indeed made a UNESCO World Heritage Site together. Avebury itself is a complex site  banked chalk edge, ditch, outer circle and two stone circles - believed to have drawn visitors to ceremonies or councils for 1000 years until, as happened with its neighbour, activity ceased there in about 1600 BCE. A few hundred metres away stands Windmill Hill, once encircled by a set of three ditches that revealed bones animal and human when excavated.
Just a stroll south of Avebury is Silbury Hill, a man-made mound built in steps like a proto-pyramid before being covered in earth. At nearly 40m high and containing a quarter of a million cubic metres of chalk, it is thought to have taken decades to construct. Some speculate it was the super-barrow for whoever sparked the building of the Avebury site; though perhaps it could have been of defensive value too.
Another stroll takes you to the third element, the West Kennet Long Barrow with its long central corridor off which stand five burial chambers.
We often talk of walking in the footsteps of our ancestors, and not far from Avebury you can do almost exactly that on the Ridgeway Trail . This is an ancient track that forms part of a route from Dorset to The Wash , with 85 miles now preserved as a National Trail, a significant part of which is in Wiltshire.
Sometimes called Britains Oldest Road, the Ridgeway gives a glimpse into our ancestors lives 2500 years and more ago: keeping to high ground for security and perhaps a dry path, it shows how trade and travel must have been important to them. In the centre of a triangle formed by Swindon , Avebury and Marlborough stands Barbury Hill, an Iron Age fort on the Ridgeway route. Cross fingers for good weather when you visit Barbury, the vista on clear days takes in much of the Cotswolds and even the River Severn away to the west. Barbury, annexed by the Romans and employed by the Saxons , is also a neat thread running through several eras of our history.
If the Ridgeway gives an idea of travel in prehistoric times, then Fyfield Down just east of Avebury provides a snapshot of what the landscape may have been like once our forebears had cleared the primeval forest, with small fields and the view dotted with sarsens not unlike those dragged to Stonehenge to create that mighty monument.
A further centre not to be missed is Westbury, between Warminster and Trowbridge . In addition to the white horse here, thought to date to Saxon times though some suggest it predates the Romans, there is Bratton Camp , a hill-fort that provides an excellent viewpoint. Nearer to Warminster is Cley Hill, another hill-fort that some say attracts a different type of visitor  it is known for supposed UFO sightings.
There is of course much more to Wiltshire than its ancient history: its hard cheese will attract foodies, going nicely with local beers like Wadworths and Arkells; in an area rich with pretty settlements Devizes , Salisbury, Bradford-on-Avon and Lacock are just four of many that can be recommended; and at the right time of year you can take in some local customs like the Grovely Rights celebration on Oak Apple Day (May 29) at Great Wishford; or the Potterne Mummers at Christmas. Longleat Safari Park will placate kids who have had a bit too much of the past; and STEAM, the museum of the Great Western Railway in Swindon, will please anyone who has ever played with train-sets or sneaked a number into an Ian Allen book. Information Britain lists accommodation in Wiltshire that makes it simple to book your trip and a pleasure to make it.