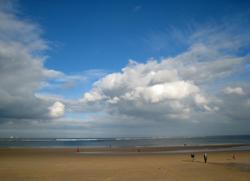 Heritage, Horses and the Coast

At the northern limit of The North York Moors National Park - one of the best known visitor destinations in England - sits one of the least known, unless youre a local: the coastal strip running from Redcar to Boulby. Travellers here will find a wealth of attractions including ways to explore the regions heritage; the thrill of Redcar Races; and the perhaps unexpected treasures of the coastline. Just inland from Redcar , south of the village of Upleatham, Tocketts Mill provides a glimpse of the significance the region once had in agriculture, a fully restored corn mill that will delight lovers of machinery and of good food  local grain milled into top quality flour available to purchase. Continue down the A173 to Guisborough where you will find the ruins of Gisborough Priory (medieval spelling being movable), and the local museum that paints a picture of past times in the town. Take the A171 east for a mile or so and youll come to Margrove Heritage Centre , focussing on the geology, industrial history and landscape of the area. An aspect of that geology  the mineral riches to be found there  meant that mining was a great source of employment for centuries: at Skinningrove between Redcar and Staithes the Cleveland Ironstone Mining Museum gives you the opportunity to experience a little of what it was like to work underground extracting the ironstone for which the area was famed in Victorian Britain  supplying our foundries and steelworks with around 7 million tonnes a year at one time. A day at the races must have been one of the highlights of the miners calendar. Redcar Racecourse has around 18 days of racing between Easter and the autumn, the most famous race being the Zetland Gold Cup in May. The current venue has been in use since 1875, but its forerunner, a less formal course on Coatham Sands, leads us to the third strand of attractions here  the coastline. From Redcar to Saltburn the beach is wide and sandy; catch it on a good day for traditional bucket-and-spade fun; or enjoy it on a windy one  that resource exploited by an annual kite-surfing festival . When you consider surfing in England its probably Cornwall that springs to mind, but these beaches have some of the best surf in Britain, with a surf cam available online to give aficionados an instant idea of conditions. And its not just above the waves where fun can be had here  divers love the wrecks off Redcar. Redcar and Saltburn are both traditional resort towns, though of rather different characters. Redcar has plenty of clubs , pubs , rides and amusements, though its also famed for its Italian ice-cream. Saltburn, purpose-built for pleasure in the mid-19th century where previously there had only been a handful of houses, is rather quieter. Rides at Saltburn means on the quaint miniature railway; and perhaps more fascinatingly, on the Cliff Railway that takes passengers 120 feet down from town to pier (though it its cliffs you are after you should also travel further east to Boulby where youll find the highest on Englands East Coast). Of course it is false separating heritage and the coast. The wrecks that attract divers to Redcar tell a story that isnt complete without a trip to Zetland Lifeboat Museum there, which houses what is probably the oldest lifeboat still in existence; and in the beachside village of Marske-by-the-Sea the oldest house in the settlement has been made into Winkies Castle Folk Museum . And for truly ancient history, a simple stroll along the beach at Millclose Howles, between Marske and Redcar, will take you to shingle that contains fossils aplenty. Information Britain has loads of places to stay and to eat in the area  Redcar well-known for its fresh fish (and their wonderful coupling with chips) as well as its ices; and details of the pubs for which the spot is equally renowned, including some pretty country pubs just inland. Saltburn likewise has a big range of restaurants and inns to cater for salt-air appetites. There is enough of interest in the area to merit a dedicated visit. Or if you are tramping the North York Moors for a week and fancy a change of scenery it would be foolish not to make the effort, and maybe add an extra day or two to your itinerary.