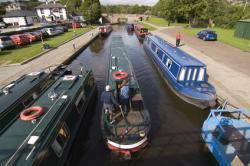 In the Wake of the Stars  Cruising the Llangollen Canal