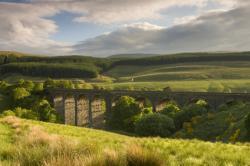 Love the Railways in North Yorkshire

Railways bring out the lad in dad, and a train ride will make most kids smile. In North Yorkshire, the place to go in Britain for preserved railways, with a little creativity you could build a weeks trip with a different such outing every day, with the bonus of seeing some of the finest countryside and seaside the county has to offer into the bargain.
Were not talking about guys who stand at the end of platforms every weekend armed with thermos and duffel bag, though some of the estimable folk running the preserved lines will have begun their career or hobby that way. This is for families with kids to amuse; history buffs; lovers of country towns; sandcastle makers; walkers; and maybe those who fancy enjoying a pint in a country pub without having to drive.
For example, take the North Yorkshire Moors Railway . Base yourselves in one of the towns they serve and use it to explore the others: its 18 miles of track offers the car-free opportunity of a day at the beach at Whitby (and the best fish and chips for miles around); the chance to explore the fine old market town of Pickering at the other terminus; a good base at Newton Dale Halt or Levisham to begin walking the moors; or a ticket to Heartbeat Country at Goathland . You can even get to it on the National Rail Networks Esk Valley Line which links up with the NYMR at Grosmont.
Find yourself a cottage , hotel or B&B close to one of those places and you can forget the car for days, or not even bring it. Enjoy a lunchtime pint without guilt. And even another half to freshen it up a bit maybe  no car. As the old advert said, let the train take the strain. In this case, you can in part thank George Stephenson who designed the route.
In the same area, 20m down the coast from Whitby, youll also find a very different railway experience, the funicular. Scarborough , a lovely resort in its own right with a multitude of attractions has two (in the heyday of the technology it boasted five) still working: the 71m run of the Central Tramway; and the 87m of the South Cliff Lift, the very first such line in Britain. Riding on the things is fun, and they take you to the seashore for digging-up, kites and other pleasantly inexpensive ways to pass the time. In the same town youll find Scarborough North Bay Railway with just under a mile of track, a miniature railway you can ride on, something that always seems to amuse younger family members. Scarborough of course has a wealth of accommodation options.
About the same distance up the coast from Whitby there is another funicular, and a different type too, at Saltburn , whose Cliff Lift is one of the oldest water-powered versions in the world. Saltburn is a buzzing little resort that merits at least a day trip.
Not too far inland the longest heritage line in Britain (if the infrequently used bits are included), the Wensleydale Railway , begins its regular services from Leeming Bar, steaming through gorgeous Dales scenery  Herriot Country - to Redmire near Castle Bolton, with stations at Bedale  for a stroll round the Georgian market town or a game of golf maybe - and another pretty market town in Leyburn , and a request stop at Finghall, not a bad place for a swift one. Try the same trick here with accommodation near one station and do holiday commutes by train. Theres even a side trip possible to spectacular Aysgarth Falls on a 1960s bus.
Another side trip on your tour can be made to the Derwent Valley Light Railway , though the line is less than a mile long. It runs from the Yorkshire Museum of Farming at Murton Park near York, which offers a bit of contrast to the railway era with its Dark Age Village and various agricultural displays and collections.
The third preserved line in the county runs in another marvellously picturesque part of the world: the Embsay and Bolton Abbey Steam Railway route may only be four miles, but it has a fine variety of attractions in that short run. Embsay is within walking distance of Skipton with its castle, plethora of fine stone buildings and independent shops, and a lovely waterside. Embsay itself is only a small village, but it does still support two pubs. Holywell Halt a short way along the track was specifically located to give easy access to Craven Fault, geological phenomenon beloved of geography teachers, and it has a good picnic site. And the other terminus is at Bolton Abbey , the ruined Augustinian Priory whose extensive surrounding estate includes the famous Strid section of the River Wharfe. Bolton Abbey is a good starting point for hikes in the surrounding country too.
Last but not least, in fact for railway enthusiasts, historians and anyone who admires engineering it is probably the great attraction here, the National Railway Museum in York which is just a stroll from York station. Three huge halls packed with exhibits, many locos and loads of rolling stock you can climb into, displays on railway history, and plenty of stuff for the kids to ride on, play with and (sneaky this) be educated by. It is a fantastic resource that will easily fill a full day.
Mix and match the railway bits with sand in your toes, historic spots and country walks and you have a memorable trip that wont break the bank, which will appeal to the Yorkshireman in all of us. And the locos will do likewise to anyone who ever played with Hornby trains, which is probably most of us.