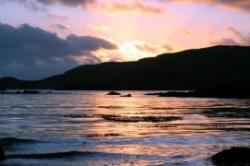 Lerwick
Did you know that Lerwick is more northerly than Moscow and is on the same latitude as Helsinki? Moscow is at 55.45N, whereas Lerwick and Helsinki are at 60.1N  by way of further comparison, Anchorage Alaska is only marginally further north at 61.1N. Lerwick is more than 100 miles from the British mainland, and is the most easterly town in Scotland as well as the most northerly.