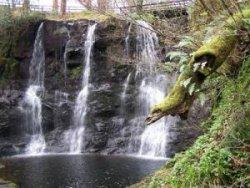 Antrim
Did you know that Lough Neagh near Antrim, with a surface area of roughly 150 square miles, is the largest lake in the British Isles? It contains the original Coney Island, celebrated in the spoken song of the same name by Van Morrison . Only Fermanagh of the six counties comprising Northern Ireland doesnt border the lake, though Down s frontage is very short.
Carrickfergus
Did you know that the only French Victory on British soil in the modern era occurred in 1760 at Carrickfergus when a French commander called Thurot captured the town? Thurot was a colorful figure  privateer, adventurer and French patriot. The Carrickfergus raid  his flotilla and several hundred soldiers briefly held the town and ransacked it for provisions  was intended as a diversion from an invasion of the mainland that thanks to the Royal Navy never took place.