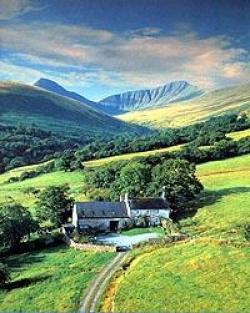 Llanidloes
Did you know that the market hall in Llanidloes in Powys is at the exact centre of Wales? The market has been chartered since 1289. The market hall itself is worthy of note, a half-timbered structure dating to about 1600, set at the crossroads of four medieval streets; in the 17th century it held assizes for the area; and in the 18th John Wesley preached there.
Llanwrtyd Wells
Did you know that Llanwrtyd Wells with a population of just over 600 is the smallest town in Britain (though Fordwich in Kent likes to dispute the title)? It was even smaller than that  just a hamlet  until 1732 when its mineral waters began to be exploited, the spa attracting far more visitors than there were locals at one time.
Machynlleth
Did you know that what is now the small market town of Machynlleth was briefly the capital of Wales? In 1404 Owain Glendower held his Parliament there (the spot probably chosen as central to the country) supposedly in a building still standing to this day, though some think it of later date, and was crowned as Prince of Wales in a ceremony attended by representatives of Castile, France and Scotland.
Welshpool
Did you know that the sheep market in Welshpool is Europes largest? Every year the facility sells about half a million sheep, along with around 10,000 cattle. The main building of the market, which was upgraded in 2009, covers more than three acres of ground, and is able to house 15,000 sheep at a go.