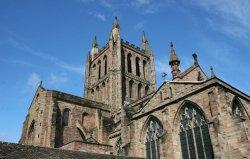 Did you know that under an old - and legend has it - un-repealed law it is it seems (in theory) legal to shoot a Welshman on a Sunday in Hereford, provided its with a longbow and within the Cathedral close? Which seems a trifle harsh, especially given the longbow was perfected by the Welsh. We strongly suggest you dont test the law!

Did you know that Herefords Bulmers factory is the largest cider making factory in the world? It contains the worlds largest vat too  stainless steel tanks installed in 1975 hold 15 million gallons of cider! Thats a hell of a student party.