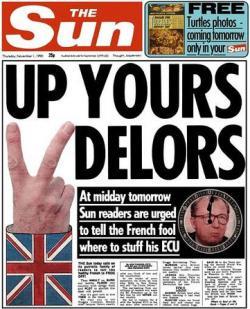 1st Edition of the Sun

Three things that you might not have expected about The Sun as it was launched: its editor (Sydney Jacobson) described it as a radical paper, which it was intended to be; it was a broadsheet; and it was part of the Mirror Group stable.
Though the phrase re-branding would not have been used in 1964, the launch of The Sun was in part such a move: it replaced The Daily Herald which was bleeding money; the new publication claimed political neutrality compared to the Heralds adherence to the Labour Party; and the designers got to use a nice new logo of the sun.
But the new paper still seemed very old Fleet Street; not a nipple in sight. The original marketing plan failed dismally, so that by 1969 it was up for sale, eventually won by Rupert Murdoch in a fight with Robert Maxwell . Murdoch oversaw a true and rapid rebranding  taking it tabloid and soon adding Page Three Girls - that has seen the paper become not only commercially successful, but a powerful weapon in British politics: when the paper claimed with its famous headline ITS THE SUN WOT WON IT after John Major s unexpected election victory in 1992 it was probably not far wrong. That self-promotion was in keeping with a tradition begun with the very first edition, which ran bigger type for the headline celebrating its own arrival than for the other main front-page story about the 1964 general election campaign.