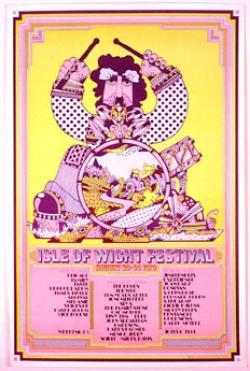 In the hierarchy of rock and roll festivals Woodstock seems to occupy the summit in most minds, but the four-day event which began on August 26 1970 at Afton Down on the Isle of Wight was attended by more fans, estimated by some sources to number 600,000.
The two events had several performers in common: Richie Havens opened the New York bash, and closed the Isle of Wight one. Jimi Hendrix, Sly Stone, Melanie and Joan Baez also played both. But the English line-up was dominated by British acts: the recently formed Emerson Lake and Palmer; Supertramp; The Who; and Woodstock veterans Ten Years After. There was a folkier feel too, with Ralph McTell, Donovan, and Pentangle on the bill; though other more eclectic tastes were covered with Miles Davis playing a set, Tiny Tim singing, and Brazilian Gilberto Gil going down a storm.
Paradoxically, by attracting such vast numbers the 1970 Isle of Wight Festival was doomed to bomb commercially: more without tickets than with turned up so the organisers were forced to declare it a free festival to avoid problems; and the logistical nightmare of an audience outnumbering the population of the island by a factor of five meant that the happening would not be repeated for more than three decades.