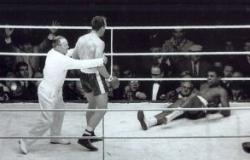 History on 21st May

It was one of Henry Coopers best timed punches, and simultaneously the worst timed, flooring Ali with a brilliant shot too near the end of the round.
Its round four of a non-title fight against Mohammed Ali, until quite recently Cassius clay. Ali who has been dancing arrogantly, his guard dropped to provoke his older opponent  the American 24, the Londoner 32 - throws a left and is slightly off balance for once in his career. Cooper strikes with a trademark left-hook that lands right on the button, all his 189lb (86kg) behind it  these days he would seem minute compared with the leviathans of the heavyweight world. His bigger American opponent  208lb (95kg) - flies backwards into the ropes, one arm briefly hooked over them. He slumps to the canvas  had this been in the centre of the ring he would have fallen like a redwood and taken more damage to his head  and three seconds later hes saved by the bell.
Though maybe he would not have been had a split on one of his gloves mysteriously opened. Ali in his corner doesnt know where he is or even who, he stands for a second and stumbles, then his team takes control. Smelling salts are applied, arguably in contravention of the then rules. That mysterious split glove gives him an extra minute to recover as it is removed and a new one donned.
Henry Cooper had won the first two rounds, Ali seeming to take his opponent lightly. They shared the third, and with that devastating blow in the fourth Cooper probably shaved that too, though Ali had opened up cuts above and below the Englishmans left eye. The cat and mouse stuff ended in the fifth round, the one Ali had predicted would be the last. It was. One minute and 38 seconds into the round referee Tommy Little stops the contest, Cooper is gushing blood from a wound that would later need 12 stitches at Guys. The crowd at Highbury, 40,000 there to see the fight, boo the winner and applaud the loser.
History has shown that Ali was a great fighter, Cooper a game one. But what would have happened had Cooper landed his fearsome left ten seconds earlier, in the centre of the ring? What if..? Our enry became a national treasure. We love a good loser, and that night he was the best, a loser who really won, take that how you will.