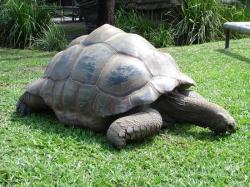 Incredible though it may seem, a tortoise that was collected by Charles Darwin in the Galapagos Islands in 1835, during his voyage on The Beagle, only died in 2006. Even stranger is the fact that Harriet, the name given to the creature (actually for 124 years the tortoise was known as Harry, until an expert visiting her home zoo in Australia corrected the error), was not by a long way the oldest known example  she ranks third in that list, behind Adwaita, a male Aldabra Giant Tortoise that once belonged to Robert Clive  Adwaita was over 250 years old when he died three months before Harriet.
Harriet was extremely lucky to have made it beyond the first flush of tortoise youth, as she is thought to have been captured on the Galapagos Island of Santa Cruz by British sailors gathering tortoises for food, and was shipped to another, Santa Maria, where Charles Darwin took her for scientific study  though some of the others he collected were eaten during the voyage. Harriet was brought to England, and later taken to Australia by John Clements Wickham, who was a Lieutenant on The Beagle when Darwin was aboard.
When Darwin obtained Harriet in 1835 she was roughly 11 long, making her about five years of age. When she died in Australia Zoo in Queensland in June 2006, having survived Darwin by 124 years, she weighed about 150kg and was described as being the length of a dinner table. Her secrets of longevity apparently were a life free of stress and a diet of Hibiscus flowers.