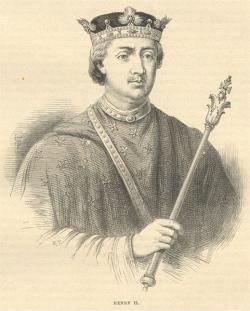 Henry II , the first Plantagenet King, ruled over territory that took in more than half of France, eventually Ireland, and of course England: he was a European monarch more than an English one. Indeed Henry was born in Le Mans and died at Chinon in France, his first visit to England occurring in 1142 when he was nine.
Although he proved an extremely capable ruler, and his legacy in terms of law, politics, and culture was of such significance that he is one of our greatest Kings, Henry is most remembered for his dispute with Thomas a Becket . In the mist of sanctity and myth surrounding Becket the root of their dispute is forgotten: Henry wished his courts to have authority over clerics; Becket did not. Abuses of the church court system were legion, with demotion sometimes the penalty for very serious crimes.
Henry, after the turbulent and bloody reign of Stephen, established the court system with the involvement of local juries; curbed baronial power; demolished castles erected illegally, but presided over a land where major additions to both Durham and Canterbury Cathedrals could take place; and had a court and kingdom where writers like Geoffrey of Monmouth and Adelard of Bath flourished.
The one thing Henry totally failed to master was his family. With four sons all eager for land and crowns he struggled to keep them in check, and faced rebellions (with the support or for the cause of their mother, Eleanor of Aquitaine) several times in his reign, and the last of them sped his end.
Richard I (the Lionheart), contrary to his romantic image, was ambitious and ruthless. He allied himself with Philip II of France, who would logically be his greatest rival in the future, and in the summer of 1189 they defeated Henry in his French holdings after a two year struggle.
Henry was only 56, but his once athletic body had run to fat, and he was exhausted by his 35 year reign. He died on July 6 1189 just days after agreeing to Philip's demands, saddened by Richard's rebellion, and the tacit support for the victors of his favourite, John .
Though Henry's death was suspiciously (and conveniently for Richard) soon after his defeat and humiliation, it does seem to have been of natural causes, although for many of the medieval kings of England who followed him violent or hastened deaths were to prove perfectly natural.