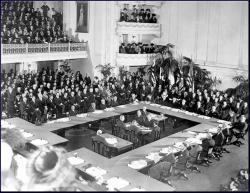 Signing of the Treaty of Versailles

The state of war which existed formally between the Allies and Germany was brought to an end with the signing of the Treaty of Versailles in the hall of mirrors in the great palace built for Louis XIV. The symbolism was brutal: Germany, or rather Prussia, had imposed a crushing treaty on France there in 1871; and the areas of Alsace and Lorraine taken by Louis XIV and returned to German rule in 1871 were once again made French.

Most of the treaty was agreed between British PM Lloyd George , the French Premier Clemenceau, and American President Woodrow Wilson, discussions involving a wider group of allies having proved unwieldy. Germany was presented with the document with no negotiation allowed.

Though the Treaty of Versailles was intended to make repetition of the Great War impossible it in fact did the opposite, creating resentment in the German people at the conditions imposed on that nation. The massive reparations had they been paid in full were estimated by some as possibly lasting until 1988 or even 2020. Germany was impoverished and her currency sent into hyper-inflation by the reparations, the perfect climate for nationalist reaction. Germany was deemed solely responsible for the war, a gross exaggeration and injustice. The allotment to the victors of various Germanic lands and cities, including separating East Prussia from the rest of the German state by giving West Prussia to Poland, provided easy targets for German nationalist demands in the 1930s.

Additionally the League of Nations and the International Labour Organisation were created by the treaty; the former was meant to be a further buffer against global war, but as President Wilson was blocked by the senate from ratifying what he had agreed America did not join. Wilson correctly predicted this would mean another global war within a generation.