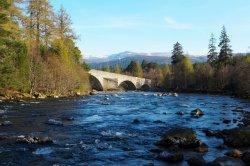 Following the lustrous path of the River Dee as it works its way from the Cairngorms through Aberdeenshire , Royal Deeside sits under the majestic guard of the mountains.

Overlapping the eastern range of the Cairngorms National Park, Royal Deeside unfolds. It is an area of Highland splendour: with mountains giving way to rolling pastoral land, forests, lochs, braes, and a scattering of rural villages, all appointed with a sense of timelessness. Royal Deeside has charmed a succession of monarchs, but when Queen Victoria purchased Balmoral Palace , in 1854, Deesides coronation was complete. Royal Deeside has four main settlements  heading from west to east: Braemar, Ballater, Aboyne, and Banchory.

Braemar is nested among the Cairngorms in a quintessentially highland setting: its 182,000 acres are all over 1,000 feet above sea level. The area is the most mountainous parish in the UK  in Braemar, over 30 Munros reach out to the heavens. Braemar is a haven for hillwalkers and skiers, with the Glenshee Ski Centre just ten minutes away from the village. The British Royal Family have had a long-standing relationship with the town: the Braemar Gathering and Highland Games receives Royal Patronage. The games date back to the 11th century, under the rule of King Malcolm III Cranmore, and celebrate in all aspects of Highland Culture. And unrestrained by Health And Safety legislation, the games early incarnations were often bloody. The medieval games would see competitors gored by stags  and indeed the 1715 games were a ruse for planning of a bloody Jacobite Rebellion . Mercifully, the only casualty amongst the contemporary games some 20,000 visitors is dietary, with a bar of sugary tablet or macaroon being demolished to sustain ones energy through the caber tossing and pipe band procession.

Ballater , deep in the heart of Royal Deeside, is framed by the skyscraping shoulders of Lochnager. With Balmoral Castle a short drive from Ballaters town centre, the burgh is the wellspring of Deesides royal pedigree. The Royal Deeside Railway carried passengers from Aberdeen to Ballater until 1966, when the service was terminated. Now the Old Royal Station is restored, housing a tourist information centre and a reminder of times when the rail route was well travelled by royalty, dignitaries and ordinary holidaymakers alike. Balmoral was purchased in 1848 by Queen Victoria, and is the Scottish home to the British Royal Family. She regarded the 50,000 acre estate as her paradise, and it is easy to see why. Balmoral is open to the public from April to July, and offers pony trekking, guided walks, and painting classes amid the most royally pristine countryside.

Aboyne , halfway between Aberdeen on the east of Scotland and the Cairngorms National Park, sits on the banks of the River Dee. Like its neighbouring settlements, Aboyne is a popular destination for ramblers, cyclists and golfers  not to mention anglers, the Dee is one of the best salmon rivers in the country; but it is gliding which the area is perhaps most renowned for. Royal Deesides topography lends itself to perfect gliding conditions where the upward lift from the air currents has helped gliders achieve the UK altitude record of 38,000 feet. Back on the ground, the Caledonian pine forestry of Glen Tanar Estate is home to a an impressive holding of wildlife, from the bold stag, to the timid reclusion of the capercallie.

The largest of all settlements in Royal Deeside and an elegantly chiselled granite cousin of Aberdeen, Banchory is a town with a bustling high street and a bevy of attractions. Just under twenty miles from Aberdeen, Banchorys growth was expedited by the rail links established in the middle of the nineteenth century, and the village faithfully maintains that periods features. Like the rest of the region, Banchory enjoys a high standard of living amongst unspoiled surroundings. From Crathes Castle , with its Jacobean decor and floral gardens, to the spectacular life struggle of the salmon leap at the Falls of Feugh, Banchorys highlights crown a wonderful introduction to Deesides blue-blooded splendour.