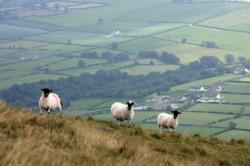 Close to the Bangor coastline, Holywood Hills is an area of uplands. The hills are surrounded by a ring of some of the major settlements in Northern Ireland, including Belfast, Holywood and Bangor. Despite being in the centre of these urban settlements, the area is relatively undeveloped and retains a largely woodland feel.

A number of reservoirs in the area helps to increase the diversity of the wildlife in the area, as well as creating opportunities for recreational pastimes. The lush green hills were a popular walking route for author C S Lewis , creator of the Narnia series, who lived nearby in his youth.

Access to the area is easy with Belfast so near, with its choice of road, rail and air connections. Available accommodation includes the Culloden Estate and Spa Hotel , a magnificent luxury hotel that sits upon the slopes of Holywood Hills and offers a fine restaurant and local golfing facilities at the Royal Belfast Golf Club . The building is a palatial 19th century baronial building set in 12 acres of rolling green countryside. The hotel is only five miles from Belfast city centre should you fancy a shopping trip.  Nearby Bangor is a popular coastal resort that is also within easy reach.