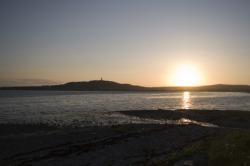 Strangford Lough is located in County Down, Northern Ireland. It is separated from the Irish Sea by the Ards Peninsula . The lough is a popular tourist attraction and is the largest inlet in the British Isles, covering 150 km². The Strangford Lough is a RAMSAR site and a National Trust administered Wildlife Scheme conservation area. The number of species found in the water totals more than 2,000 and 75% of the worlds entire population of light-bellied brent geese over-winter there. One-third of Irelands population of terns nest there in dense colonies during late spring and early summer.