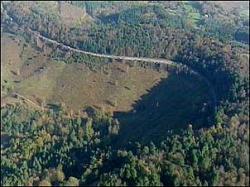 The Devils Punchbowl is a natural feature found near the town of Hindhead in Surrey, England. The area resembles a large natural amphitheatre, or cauldron. Local legend suggests it was formed when the devil, who was living nearby at the time, scooped out a large handful of the earth to hurl at Thor, the God of Thunder. The area was one of the first acquisitions to be made by the National Trust, who have owned the area since shortly after it was formed in 1895. The unique flora and fauna found at the Devils Punch Bowl mean that it has been designated as a Site of Special Scientific Interest (SSSI).