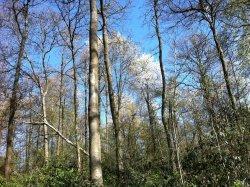 Ranmore Common is the name given to both a village and an area of wooded common land that is situated to the northwest of the English market town of Dorking in Surrey. The area is in the civil parish of Wotton. The common, which lies on the North Downs within the Surrey Hills Area of Outstanding Natural Beauty, has been designated as a Site of Special Scientific Interest. The common is a mix of acid grassland and broadleaved, mixed and yew woodland. Nearby, in Tanners Hatch, there is a Youth Hostel and St Barnabas Church in the village hosts the burial sites of some notable figures, including Sir Harry Hylton-Foster.