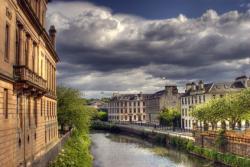 The River Clyde is the United Kingdom's eighth longest river and the third longest in Scotland. The River Clyde flows through Glasgow , Scotland's largest city, and it once stood at the heart of trade in the British Empire. The banks of the Clyde also proved ideal for shipbuilding and it is this industry above all that the river is best known for.

Victorian industrialists David Dale and Robert Owen built their mills and the model settlement of New Lanark on the banks of the Clyde. The mills harness the natural power of the Falls of Clyde . The famous Cora Linn is the most spectacular of the falls. The mills have became a museum and a World Heritage Site. The waters are still harnessed here, but now to generate hydroelectricity at the power station.

Downstream from New Lanark the Clyde is joined by the Scottish River Avon and then it flows into the West of Scotland conurbation. An artificial loch has been created within Strathclyde Park , between the towns of Motherwell and Hamilton , by altering the course of the river. The river flows on into Blantyre and then Bothwell, where the ruined Bothwell Castle stands on a defensible promontory.

Initially it was trade that drove the rapid growth of Glasgow. Facing the Americas gave the already formidable natural harbour another advantage and tobacco and cotton flowed in massive quantities up the Clyde. The Clyde later became known for shipbuilding and a thriving industry soon replaced the dwindling trade with the Americas. The Queen Mary and the Queen Elizabeth 2 were both built on Clydebank, along with many other commercial and naval vessels. The Clydebank shipbuilding industry is now a pale shadow of its former self, with just two firms remaining operational. Trade continues but the port has moved downstream into the Firth of Clyde.

Efforts have been made to lessen the impact of the waning of the shipbuilding industry. The Clyde Waterfront Regeneration has attracted large scale investment to an area stretching from Glasgow Green to Dumbarton . Market gardens and garden centres were established on the fertile plains of the Clyde Valley. Tourism brings many visitors to the riverside. In Glasgow, former dockland areas have been redeveloped into smart riverside housing with a range of amenities provided nearby. The Glasgow Harbour project, the Glasgow Science Centre , and the creation of the Scottish Exhibition and Conference Centre are all examples of this push to replace the old decaying industrial sites.

From Charlotte Smith on 3rd November 2009
it was very informative and easy to read, it gave me the information i wanted and overall it is a great piece!