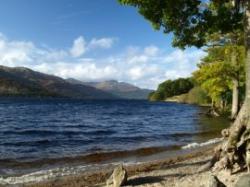 Loch Lomond is an inland freshwater lake situated in Scotland. The loch is the largest freshwater body in Scotland and within the United Kingdom, it is surpassed only by Lough Neagh in Northern Ireland only. The very deep Loch Ness is larger by volume of water but not surface area.

Loch Lomond lies on the Highland Boundary fault, a geologic fault that bisects Scotland running from Arran and Helensburgh on the west coast across to Stonehaven in the east. The fault marks the division between the two distinct regions of Scotland, the Highlands to the north of the fault and the Lowlands to its south. The lake is 24 miles long, up to five miles wide with a maximum depth of around 620 feet.  There are approximately sixty islands on the loch. The largest of them, Inchmurrin, is also the largest found within any British lake. Not all of these lakes are natural, several appear to be Crannogs which were man made in prehistoric times.

Loch Lomond is a very popular tourist destination, aided by the fact that it lies only 14 miles north of Glasgow , Scotlands largest city. The A82 is the main route to the loch and, despite many improvements to the road over the years, it can still be quite busy in peak summer periods. In 2005, a poll conducted by the popular British listings magazine Radio Times voted Loch Lomond as the sixth greatest natural wonder of the world.

For those who like one of Scotlands favourite sports there are two fine golf clubs by the loch. The Loch Lomond Golf Club is on the south western shore, the club has hosted several important international events, not least of these being the Scottish Open . The Carrick, a rival club rather cheekily recently opened its fairways right next door to the Loch Lomond Club.

The eastern bank of the loch is home to the West Highland Way . This 95 mile footpath runs from Milngavie , north of Glasgow, to Fort William in the Scottish Highlands. Those who prefer to cycle will enjoy the breathtaking scenery that awaits them along the West Loch Lomond Cycle Path. This runs for 16.5 miles along the west bank going from Arrochar and Tarbet railway station in the north, to Balloch railway station in the south.

As you might expect from one of Britain's mightiest bodies of water, Loch Lomond is one of the foremost boating and water sports venues in Britain. The loch is open to all and youll always see a wide variety of water craft afloat on the lake in the summer months. The popularity of the lake means safety has to be taken seriously and the Loch Lomond Rescue Boat provides 24-hour safety cover on the loch.