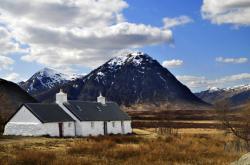 There is always one, isnt there? A friend who walks the West Highland Way with a hole in his sock. If the 95 miles of Scotlands most loved and arduous of treks made his blisters horrendous and complaints intolerable whilst traversing a landscape where carnivorous midges quicken tempers, the enduring schadenfreude is more than ample compensation.

So too the walk. Since opening officially in 1980, the West Highland Way has become Scotlands most loved route from Milngavie on the outskirts of Glasgow to Fort William in the heartland of the Scottish Highlands. The A9 may be quicker and easier on the feet but it is the West Highland Way that gives around 85,000 people a year sore feet and memories which will last long after the blisters have healed and the feeling has returned to the legs.

The route to Fort William covers all terrains. Its amazing to think that some extremists choose to run it; the walk alone is enough for we mortals and it is vital to be prepared. Booking accommodation shouldnt be a problem save for the summer months, but getting your footwear, rucksack and clothing correct is all important. Good walking boots and socks save the feet. Prepare for all weathers, especially the rain. A 70 litre rucksack will make you feel like Atlas in no time so make sure that your pack is comfortable and the weight is distributed evenly. Pack only what you need and even then there are plenty of companies who will gladly ferry it from town to town for you.

Setting off from the obelisk in Milngavie, the West Highland Way opens out on the road to Carbeth with the lowland greenery of Mugdock Country Park, where deer, hare and dog walkers converge on the very cusp of the Stirlingshire border. A gentle five-mile excursion, 90 to go. Carbeth to Drymen, another seven miles. But it is on the road from Drymen to Balmaha that civilisation has been truly exorcised by rolling vistas of green farmland and woodland. Loch Lomond is not far away. Drymen offers the chance to stock up on supplies before heading to Balmaha on the eastern shore of Loch Lomond. Conic Hill looks over the loch, marking the Highland Boundary fault, where the scenery takes on a gnarled beauty with knuckles of rock poking out of green hills.

The West Highland Way hugs Loch Lomonds eastern shoreline on route to Rowardennan, before snaking its way towards Inversnaid and Inverarnan. Walkers follow in the footsteps of history and legend, hiking through Rob Roy country in the route to Crainlarich, Tyndrum and Bridge Of Orchy, using 17th Century military roads, built by King William III to help suppress the Jacobite rebellion and recalcitrant Highland clans. Indeed, Bridge Of Orchy was created by the government to help tame the clans rebellion.

For every step north the landscape becomes more dramatic, sculpted by glacier and wind. The great expanse of Rannoch Moor opens out towards Glencoe. Scrambling across the Devils Staircase, a scree-laden rocky ledge, walkers arrive at Kings House. From there the hike will take you across the eastern end of Loch Leven towards Kinlochleven, the last town, the last chance to rest before the fourteen mile hike to Fort William, the finishing line under the shadow of Britains highest mountain, Ben Nevis. At 4,406 feet, youd be forgiven for not climbing it.