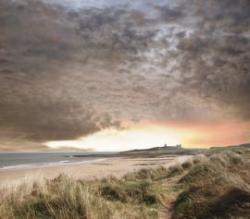 For many who have not visited the area Northumberland probably prompts thoughts of hill country, with its National Park having The Cheviot, standing proud at 2674 feet within it. But the Northumberland Coast deserves to be far better known: it has many gorgeous and extensive beaches; a series of magnificent castles and historic sites; the Farne Islands and Holy Island; and some wonderfully characterful coastal villages and little towns. No wonder the 39 mile stretch from Berwick to the Coquet Estuary was designated an Area of Outstanding Natural Beauty (AONB) more than half a century ago.

It makes sense to begin this excursion along the Northumberland Coast at its northernmost point, the town of Berwick-upon-Tweed . England and Scotland contested ownership of the town for centuries  it changed hands 13 times in all  a history symbolised by its Elizabethan town walls, now providing a great walking route rather than security against invasion. Berwick is full of character, from its fine bridges joining the town to its other limb, Tweedmouth , to the Vanbrugh-designed barracks via innumerable Georgian houses  no wonder Lowry loved the place, his sojourns there traced in markers around the settlement  stroll like he did and discover its secret little corners.

Travelling southwards takes you past Redshin Cove, which epitomises the epithet rugged as regards the coastline, reached by passing through Scremerston. A few miles further south leaving the main road again  the A1 is the arterial road that pretty much hugs the coast for most of our journey  brings you to Goswick, a small hamlet that once more has incredible beaches and marram dunes that so few get to see, with the added bonus of views eastwards to Holy Island . Dont pick up anything metal here though  it was once a bombing range  though that doesnt seem to put off horsey types, the hard sand perfect for a ride out.

Lindisfarne , Holy Islands other name, can be reached via the causeway that the high tide covers  dont even think about risking it if the tide is turning against you! The wait is worth it, however: the remains of the Benedictine Priory , the Tudor castle, and the birdlife on the north shore in particular cram contrasting attractions into a small area of outstanding beauty. Continuing southwards brings us to Budle Bay and Warren Mill, once an important lime processing area and port. The views across the bay are stunning  but dont be tempted to walk across at low tide.

Bamburgh with its mighty crag-top castle is just around the corner. Its a place with something for everyone: a weapon collection for bloodthirsty lads; beautiful tapestries and paintings for the artier members of the family; and for dads and history nerds the little museum dedicated to aviation and the engineering genius of Lord Armstrong who restored the place in the late 19th century. And when you are all cultured up, the huge sandy beach beckons. Three miles or so offshore from Bamburgh, easily seen from the castle , are the Farne Islands, a fantastic bird sanctuary with a major seal colony too. Trips around the islands and onto them can be made from the village of Seahouses 10 minutes south on the B1340. The harbour is a pretty one, but its the dunes here that will surprise newcomers.

The second of the great Northumberland coastal fortresses, Dunstanburgh Castle , is found between Embleton and Craster . This is of the decidedly ruined variety, spookily atmospheric on its headland  views from the shore of the stronghold silhouetted against the skyline will stay with you forever. Embleton sits in its own little bay with sandy beach and dunes, and the village itself has a fine Pele tower. Craster is a pretty little port famed for its kippers and smoked salmon, a must for foodies. The walk to Cullernose Point along the shore takes in basalt cliffs for a bit of variety.

Another quarter of an hours drive brings us to Alnmouth . The village is another scenic port, favoured by sailing cruisers rather than grain exporters these days, and there are two fine golf courses (Embleton and Seahouses not lacking in that department either). And inland is the castle that the village was built to serve  Alnwick , the home of the Percy family, surely the greatest of the regions medieval strongholds. The gardens are incredible, and a visit to the castle involves a lot more than strolling about looking at walls  there are loads of things to do here  games, dressing up (I always thought Id suit one of those tall conical hats (Hennin  ed.) noble ladies wore in the Middle Ages until I tried one here), falconry displays, retail therapy... And see how long it takes for kids to notice it was used in the Harry Potter movies .

At the other end of Alnmouth bay five miles south Warkworth has a more modest, but very well preserved, castle. Perhaps more intriguing is the little hermitage dating from Tudor times, and the Norman bridge. Walks along the River Coquet provide a change of scene and tempo, or make your way to the beach, another sandy gem that is also known locally as a good fishing spot  dabs, flounder and even with luck a turbot or bass in season - as is the pier (for fine weather  avoid when things get rough) for mackerel when theyre around, and hopefully a few other species too.

From Warkworth Beach youll see Coquet Island a couple of miles offshore. You cant land as its a protected bird sanctuary, but from Amble you can in summer (with good weather) take boat trips around its shoreline to spot the Puffins, Terns, Fulmar, Kittiwakes and Gulls to name but five. Amble has a thriving marina, and - as you should have come to expect by now - extensive sandy beaches, the crescent of Druridge Bay just south of the town with nature reserves and a country park to add to the attractions.

The AONB ends at the Coquet Estuary, but the Rugged Northumberland Coast doesnt. Newbiggin-by-the-Sea has its promenade and beach, plus a maritime centre where the history of fishing here is explained. Blyth s heyday as an industrial port is long gone, but it has excellent facilities for yachts, and three miles of white sandy beaches. And other smaller centres have their own contributions to make to the experience of visiting this under-explored area.

Lets be honest, our weather can be variable. But the joy of walking on the sands and playing in the dunes remains even in the wet. And if it gets just too wet, a nice dry castle or seaside pub will do the job for most of us. Or a proper fish and chip cafe. But when the sun does shine it is hard to beat having miles and miles of sandy beach pretty much to yourself; or fishing spots with barely another rod in sight.