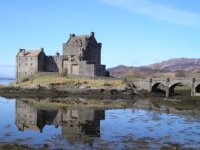 From tiny towers like Dalton Castle in Cumbria, to Windsor, the biggest castle in the country, from the Iron Age fort of Castell Henllys in Pembrokeshire to Lethendy Tower in Scotland, the last true fortified house built in Britain, this country has a huge variety of historic castles.
The four capitals each have fortifications with their own story: Cardiff Castle haunted by the Marquess of Bute who restored it in the 19th century; The Tower of London the scene of thousands of executions; Edinburgh with its one oclock gun and Stone of Destiny; Belfasts which nearly ruined the Donegalls when it was rebuilt in 1870.
Castles are a painless way to teach kids history: Dover Castle makes a great stop off when crossing the channel, a fortified introduction to British history from Roman times to WWII.
These days, though, many of Britains castles show some imagination beyond retelling history. Alnwick in Northumberland  Hogwarts in the Harry Potter films  amuses guests with medieval games, dressing up, and falconry. Ludlow Castle, a magnificent reminder of how unsettled the marches once were, is the venue for plays and concerts during that towns festival. Traquair Castle, the oldest inhabited house in Scotland, revived its brewhouse some time ago and produces fantastic beers. Bamburgh north of Newcastle has an aviation museum - and if the kids are bored the beach is only yards away.
But perhaps it is just the look of the things that fascinates us. Framlingham Castle in Suffolk with its 12 towers, a rival for the chateaux of the Loire; Scotlands romantic Eilean Donan Castle near Skye proving that small can be utterly beautiful; and the marvellously symmetrical Beaumaris on Anglesey.
A castle makes a great focus for a day out, and leaves memories for a lifetime.