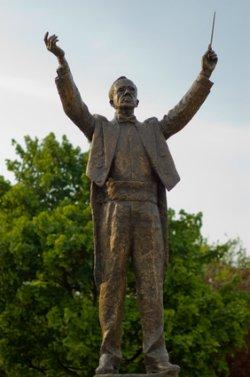 March is the month to catch Cheltenham at both of its bests: genteel and elegant Regency survival, home and inspiration to Gustav Holst in the heart of the Cotswolds in spring; and for four days the temporary centre of the racing world.

As regards the racing: if you dont want to see the races; bet on them; hear about them; and discuss them, then plan to visit sometime before March 16 or after March 19. But if the buzz of a world-famous meeting is your thing, you know where to come.

With its hospitality roots deep in Georgian soil Cheltenham  once one of the great spas  has had time to develop a tradition of top quality restaurants. And the retired Indian Army officers who settled there in the Victorian era knew how to do themselves well too  enjoy a chota peg at inns like The Beaufort or the London as they did.

That same history is reflected in the towns hotel provision too: The George in the centre; the Cotswold Grange; the Cheltenham Park just outside the town; Butlers; the Queens which can boast one of the most elegant facades in Britain; Thirty Two, combining Regency elegance with modern boutique hotel style on a bijou scale as the magnificent Cowley Manor does in a grander way; Hilden Lodge and naturally The Cheltenham Regency all give guests the chance to enjoy Georgian and Regency architectural splendour combined with modern comfort. If you want to go back further The Greenway built in Elizabeth Is reign will attract you. Same period, smaller scale The Guiting Guesthouse in an outlying village could suit you.

You dont do history? Then Cheltenham, whose economy boasts several high tech aerospace leaders, does contemporary too with the likes of The Thistle, Holiday Inn, Hotel du Vin, Charlton Kings and Big Sleep Hotel.

The countryside around Cheltenham is some of the prettiest in Britain, enjoyed by walkers  the most dedicated of whom will find their way to Offas Dyke Path or maybe the Forest of Dean - and those who enjoy a quiet motor through quiet villages, where those not behind the wheel can enjoy a snifter or two in some of the great inns and pubs Cheltenham and its hinterland offers. Why is it that beer tastes better in good old-fashioned stone buildings? Maybe its the good old-fashioned landlords who know how to keep it. Those of a younger persuasion will, however, be surprised by the buzz that night-time Cheltenham can provide in hipper areas like Montpellier, and in plenty of stylish clubs all round the centre.

Old fogeys (and young ones) gravitate to Cheltenhams shops  it is renowned for antique places, but has some very chic clothing outlets too. And the town offers a wide arts scene  not just places like the Cheltenham Art Gallery and Museum, but also the Playhouse, Everyman and Bacon theatres. Theres even a concert on March 21 by the towns own Symphony Orchestra.

For many thousands of visitors, though, Cheltenham in March is synonymous with National Hunt racing. The energy level soars, as do pub takings, with the influx of what can feel like half the population of Ireland. Fortunes are won and (more often) lost in gambling on the race-cards on the four great days of the festival. Everyone seems to know about a sure-fire winner, though happily for the bookies there is no such thing. But for lovers of horse-flesh who want the atmosphere and excitement of Royal Ascot without that meets top-hat social baggage Cheltenham Festival is trilby-city.