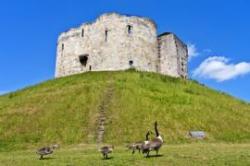 York and Its Surrounds

This April is a great time to be heading for York. The major attractions are all open, with luck the weather will continue to be great, and there are a couple of very special events that could tempt you to arrange a break in the city  not forgetting its fine surrounds.

Those two special events are definitely not connected. The first is a royal visit, The Queen , Prince Philip, and Princess Beatrice attending the Royal Maundy Service in York Minster on April 5th. Even if you are not a fervent royalist the pageant and history of the event could provide a memory to last a lifetime.

Rather more prosaically, but extremely attractive nonetheless, is the Chocolate Festival taking place from the 6th to the 9th. The main base for the event is in Parliament Street in the city centre, though trails and other activities will be found elsewhere. If youre lucky your visit will coincide with one of the days when the Nestlé factorys aroma drifts over the centre, an invisible lure to the confectioners on the famous Shambles shopping area, the perfect antidote to anyone with Mall fatigue.

York is of course one of our finest tourist destinations, with accommodation and food and drink provision in accordance with that status  this site can direct you towards a plethora of options to suit every pocket.

Elsewhere on this site we explore in detail the possibilities that Yorks many museums offer, but its worth a quick reminder here: Jorvik Viking Centre is something the kids will love, and the children being contented makes any break better. The castle museum is another gem, but for stuff to clamber aboard, ride on and for dads of a certain type to drool over you have to make your way to the National Railway Museum . Eat a good breakfast before you go (you have time, it opens at 10:00) as this is a big site with lots to do.

A bit less famous, but well worth the effort of seeking out, are The Merchant Adventurers Hall , a medieval wonder; the superb Georgian splendour of Fairfax House ; and Treasurers House , the latter one of several spots in the ancient city where with luck  good or bad, you judge  you may get to spot a ghost or two.

Above all, however, York is a beautiful city to wander around, whether that means taking in the magnificence of the Minster, or slipping down one of the many snickelways (that wonderful word coined to describe so poetically the citys alleys, ginnels and narrow passages) and exploring the many independent shops  do seek out real York Ham if you get the opportunity, a million miles away from the reformed stuff in plastic packets we too often get in its place.

Somewhat contrarily one of the best reasons for being in York is not the city itself but its surroundings. You are in the Vale of York , a placed of beauty to tour at your leisure without venturing far from base. Or you can motor a bit further (or let the train take the strain) and head to the North York Moors to really stretch your legs in what is some of Britains loveliest countryside.

And if the great outdoors starts to pall but you still want to be in the open (and you are of a sporting nature) there are race meetings throughout April at courses within easy striking distance: at Thirsk on the 21st, Wetherby on the 29th, Beverley on the 18th and 26th, and Ripon on the 19th and 28th. So basically you could lose your shirt  or pay for a nice new silk one  pretty much anytime in the latter part of the month.

York is a student city as well as a tourist one, with a wide range of evening entertainment on offer in venues big and small. As a sampler in April youll find comedian Sarah Millican at the Grand Opera House on April 3rd, the same theatre presenting the musical Chicago from the 16th to the 21st (though as with all dates do check on both availability and the latest regarding performances before setting your heart on attending). The Barbican has a couple of gigs worth noting too, McFly playing there on April 17th, and the rather hipper Bombay Bicycle Club two days later.

As a great railway centre York is easy to access without the car, and as a fairly small city is not too hard to get around (the main sights and sites at least) on foot, or if needs be by bus. Railway lines radiate from this old hub too, so for those whose idea of a break involves not having to drive it is hard to beat. Which in truth goes for the place as a whole.