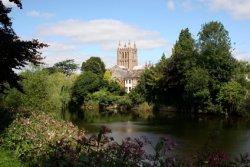 April can be a tricky month for weather in Britain: surprisingly sunny days interspersed with spring showers. So a destination where the best of the weather can be enjoyed outdoors, but with lots to do under cover, is just the ticket: step forward Hereford.

A break in Hereford is a chance to dig deep into our history and to enjoy the great outdoors. From the city the gorge at Symonds Yat; the Malvern Hills; and the lovely Wye Valley are all within easy reach; we would recommend getting hold of one of the many guidebooks to walks in the area to make the most of a visit. And within Hereford itself history is all about you.

The 11th century cathedral is one of the loveliest in England, its exterior redolent of the centuries, and more prosaically its close a great place to sit and munch a sandwich in peace perfect peace. The late-13th century Mappa Mundi there transports you to a medieval mindset where Jerusalem was the centre of a flat world; the chained library of 1600 or more volumes and manuscripts (some dating back to the 8th century) likewise. Careful there if you are Welsh, by the way: some reckon it may still be legal to shoot Welshmen within the Cathedral bounds on a Sunday, if using a bow and arrow: we definitely do not recommend testing the law! The St John Medieval Museum fleshes out these historical impressions, as does The Old House in High Town.

In Hereford you can begin to immerse yourself in history in many of the lovely old hotels and inns. Fancy early Victorian elegance? Try the Old Vicarage Guest House three miles from the city, Munstone House Hotel, or Somerville House. Georgian more to your tastes? Holme House Hotel in the Wye Valley may be your thing; Moccas Court has few rivals as regards the splendour of its Georgian architecture; or just a stroll from the Cathedral, Castle House dates from that same era. If you want to go a bit further back in time, 17th century Upper Newton Farmhouse in Kinnersley delivers. Still not historic enough for you? Then The Green Man in Fownhope, an early Tudor building, is a good bet - according to legend it even has a shackled ghost called George to give a bit more antic atmosphere! For those who prefer self-catering Hoseasons and Welcome Cottages have plenty of properties around Hereford: The Forge Cottage and White Rocks just two splendid examples of what is on offer.

A good traveller takes care to enjoy the fruit of the country, which in Herefords case comes partly in liquid form. Once the threat of raids from Wales had been dealt with  the Battle of Mortimers Cross in 1461 nearby saw the last of that threat  orchards were planted in great number in the verdant Herefordshire valleys. Combine then historical and gustatory researches in a visit to the Cider Museum in the city, and its enterprising diversification the King Offa Distillery where you can find wonderful apple brandy; Bulmers Cider Mills in the city can be visited by appointment; or a car-ride away in Ledbury Westons Cider has a welcoming visitor centre.

April is a bit early for local asparagus, but search out some real Hereford marbled beef if you enjoy your meat: some of the local restaurants and hotels make a point of offering this on their menus.

The outdoors and the indoors can be combined along with the historic at properties like How Caple Court Gardens; or Broadfield Court Gardens and Vineyard, home of Bodenham Wines, where great local food and perhaps the purchase of a bottle or two of their product  made in a 16th century winery so again justified on research grounds alone  can be part of your day out.

The railways only got to Hereford in 1854, reflecting a lack of industry then that has happily left the city one of our loveliest. But the station is still there today if youd like to leave the car and start your trip relaxed.